BarclayHedge survey reveals the majority of CTAs are unconvinced by Bitcoin futures, although nearly one third say it’s too early to tell.

A survey conducted by BarclayHedge among the CTA community has revealed considerable uncertainty about the investment value of the new Bitcoin futures contracts offered from December 2017 by CBOE and CME.

73% of respondents from a wide range of firms located in Switzerland, Canada, Japan and the UK, as well as the majority in the USA, did not believe that Bitcoin futures were a valuable or useful addition to a diversified futures portfolio and only 5% said they were already trading these contracts. However, that figure rose towards 19% when CTAs were questioned about whether they planned to participate in Bitcoin futures within the next six months.

Q1: Do you consider Bitcoin futures to be a valuable/useful addition to a diversified futures portfolio?

Q3: If not, do you intend to do so within the next six months as these contracts develop?

Comparing the contracts offered by the two exchanges, there was a majority preference for the CME although 56% of those responding said they remained undecided – a statistic underlined by the majority verdict that currently liquidity in Bitcoin futures was too low to encourage involvement.

(In the week beginning January 8, some 6,030 Bitcoin futures were traded on the CME’s Globex market; the CBOE volume for the same period, perhaps demonstrating first-mover advantage, was 24,610 – a daily average of towards 5,000 contracts).

Q4: Where are you likely to trade Bitcoin futures?

Low liquidity was however, not the only worry revealed by the BarclayHedge survey. About a third of respondents expressed concern about high margins saying these were a disincentive to trade, although 67% said the high contract margins are “appropriate."

Separately concerns were expressed about Bitcoin’s high levels of volatility, while over 31% of CTAs explained that the contracts were simply too new to judge given there are currently insufficient data points for formal analytics.

On the other hand one third of the survey participants agreed with the negative proposition that: “Cryptocurrencies are a bad idea and should not be encouraged”.

Q5: What are your biggest concerns about Bitcoin futures? (check all that apply) 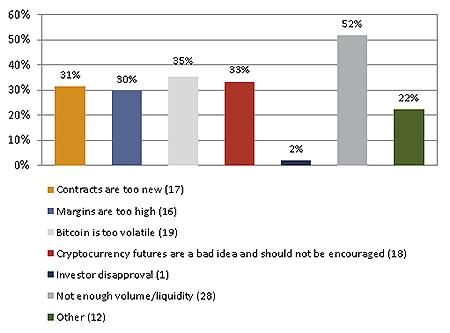 Q6: In your opinion, high contract margins are: (check all that apply)

Looking into the future, negative sentiments were to the fore. While over 30% of respondents said they believed Bitcoin futures would turn into very successful, high volume contracts, this view was contradicted by the majority (towards 60%) who thought that in a year’s time the contracts would be inconsequential and the remaining 10% who believed the contracts will no longer exist.

Access in-depth knowledge on the firms, strategies, performance and investments with BarclayHedge ProAccess. Leverage the advanced analytics tools in FundFinder along with complete access to BarclayHedge research reports and exclusive articles for members only.